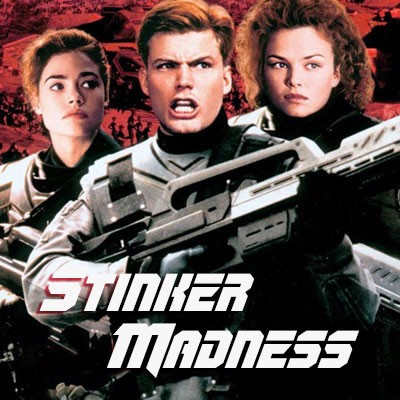 Paul Verhoeven had a vision for a caricature of a Fascist future society and totally nails it in the guise of a silly space battle movie. Toss in a 3 way love story with incredibly strong and easy to care for characters, exceptional acting and you've got one of hell of a good movie.

Why then is this movie on Stinker Madness? Well because in 1997 the critics and Sam and Justin made a single mistake; they didn't get this movie. The world wasn't ready for Starship Troopers. We were expecting a film adaptation of the Robert Heinlein science fiction novel of the same title. We weren't expecting a high school football game with backflips. We weren't expecting children smashing beetles and mothers laughing maniacally at it. We weren't expecting Robocop and Total Recall with a serious story and moral statement. So it was panned by critics. Thus making it a "bad movie". But it truly is a masterpiece in pop culture.

We applaud Verhoeven's use of exposition in the clever guise of the "Would you like to know more?" Internet commercials. The entire universe is setup in these quick interjections and in a fast paced and entertaining manner, while some of the funnest moments come in these. The heaviest statements about this world take place in these and are hilarious. The children fighting over the guns and military passing out huge bullets, "The only good bug, is a dead bug", and the aforementioned children smashing beetles under foot.

The acting is top notch from the ancillary actors, especially Clancy Brown, Dean Norris, Rue McClanahan, and Michael Ironside. The satire is delivered and truly backs up the universe that is being brought to the audience. Clancy Brown plays one of the most memorable drill instructors in film history.

Jake Busey....oh sweet Jake Busey. Where are you? Why are you not in all of the movies? You, sir, should have been a bigger deal. He steals the entire show and is brilliant. Boo to you, Hollywood casters. This man should be a thing.

Starship Troopers has all the staples of a great bad movie. It's packed with action, its fast paced, its morbidly hilarious and the practical effects are gory and top notch. But the acting, story and masterful direction make the film a good movie packaged as a bad one. We applaud you, Verhoeven. This film is a masterpiece and should be viewed by everyone.

How do you feel about this post?
Happy (0)
Love (0)
Surprised (0)
Sad (0)
Angry (0)
Tags:
Paul Verhoeven must see movie 90s sci-fi Netflix
Prelude to Jem and the Holograms
Prelude to Starship Troopers