Beastmaster 2: Through the Portal of Time

"Let's take the barbarian guy out of his world of fantasy and put him in our world of taxes and endless advertising," said a man in a tie once or twice. Unfortunately, for said tie guy, no fan of film has ever said, "Yes I want that." Yet this travesty of the genre still attempted to woo audiences by sending the Beastmaster into Los Angeles so we can watch what happens when he wants to get pizza. Hooray!

While the premise of this film is one that typically infuriates fans (see Masters of the Universe and Jason Takes Manhattan), Beastmaster 2: Through the Portal of Time pleases from end to end. It has some sort of charm that doesn't make sense. The jokes are total crap. The acting is painful. There's no boobs. Yet somehow it all adds up to shenanigans that simple entertain lovers o' the stupid. 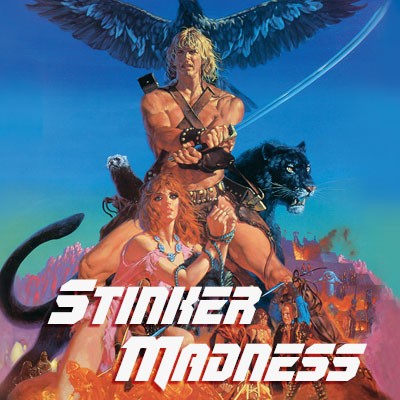 Let the ferrets fly and the tigers die as Jeff and Tucker from If We Made It podcast show up to help us try to make sense of The Beastmaster. Does PETA show up to put a stop to the madness? Does Tanya Roberts save the movie by letting the ladies out? Does anyone get 'sploded? (Spoiler alerts - no, yes, yes - respectively)

This movie is completely nuts. Its a complete knockoff of Conan, but so wild in every way, it stands on its own. Beastmaster has some pretty vague powers, villians have pretty vague motivations and relationships, minions wear helmets that don't allow them to see anything, bat-people may or may not make soup, and people disappear randomly for much of the movie. It's great.

How this film didn't get shut down with animal cruelty is a pretty big mystery. Most people know that the tiger that was painted black to become a panther died, but the incredible feat is how many ferrets must have been murdered. They fly across the screen all the time; they had to have hired a guy just to toss ferrets. Another falls to his death, another drowns, god knows how many were eaten by the eagle.

Sponsored by Critter Commander! Build an army of animals to do your bidding to do things like your laundry and wash your car.

This 0.5 episode contains the usual nonsense we have but we really amp it up in honor of Marc Singer's manliness. Jackie really loves this movie and it turns out that her entire youth was geared around it.

We start out talking about how The Beastmaster was just a modest theatrical success but really came alive on VHS and achieved cult status. Justin recounts that he double-featured this with Deathstalker and Sam only remembers that a guy gets his nuts bit off by a ferret. Jackie tells us that this movie is like Tom Jones; adult/elderly women eat it up. It's like the 50 Shades of Grey of cheesy movies. At least until 50 Shades of Grey comes out in the theaters.