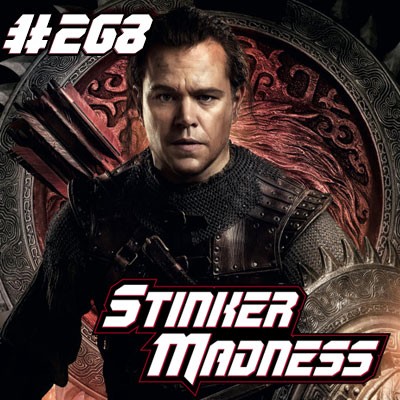 Matt Damon and Oberyn Martell find themselves in the middle of the Battle for Helm's Deep with an Elven army posing as Chinese on one side and an horde of Orcs posing as aliens on the other. Yep...aliens. Our front runner for dumbest film ever made.

The plot of The Great Wall is easily the most poorly thought out plot since....well ever. Its dumber than Reign of Fire. It's dumber than Superman IV: The Quest for Peace. It's dumber than After Earth AND Lady in the Water AND The Happening combined. It can't be understated how dumb this film's plot is. The only way you can argue the logistics of this "war" between the Chinese and space dog-lizards is that both sides are complete morons.

The entire thing goes that these space monsters flew across the expanse of space atop an asteroid that crashed into Earth. So their nasty and want to eat people...sorta. Well the Chinese aren't down with getting turned into poop so they built a 5,500 mile wall to keep these little bastards out. Out of what is yet to be determined.

Now the other plot elements one must know:

These are just the problems of the film that we can discuss here without spoilers. If we were to list all the rule-breaking, reality-bending, plot-holes, bad decisions, character buffoonery, and incredibly bad military techniques we'd have 1/3 of a George RR Martin book written.

Aside from how dumb the plot is this film is well worth it for the incredibly bad action sequences, the horrendous dialogue and the wooden and confused performance from Matt Damon sporting a sometimes there Irish accent. It will have you cowering in your seat, while you giggle yourself to embarrassment at how awful it is. This flaming pile of lizard-dog crap is going to be tough to beat for Best Bad Movie of 2017.

Also get a load of Jackie's incredible drawing of the monster's of The Great Wall.