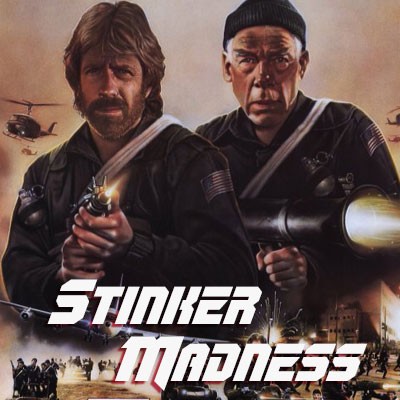 Part 2 of Carl's Inaction in Action series, we look at Chuck Norris and Lee Marvin in the Cannon Group's The Delta Force. It's part best hijacking movie ever and then part iconic Chuck Norris ridiculous action. Sometimes you in suspense and then other times your slapping your head in how preposterous it is.

There's two movies here. One is a slow-paced, well directed, solidly acted hostage crisis movie. The other is 100 guys invading a country and blowing everyone up. The first 100 minutes have 0 shots fired. It isn't even until 114 minutes that The Delta Force starts firing bullets back. But once they start shooting they don't stop until there's about 3 minutes left in the film.

So again I have to review this based on the two different movies. The first movie is very frightening. You really feel fear for the characters and there's some very heavy and serious thematic elements brought up. This all may be even more relevant today than it was in 1986 (when the film was released). There's anti-Semitic conflicts and Holocaust connections. There's general terror as we all know how awful a plane hijacking is.

But at the same time, the two main terrorists (one of which is maybe Robert Forster's best performance which is saying something) flip-flop back and forth about how evil they are. Sometimes you almost expect them to be revealed as misunderstood freedom fighters but then they just get downright villainous. Very strange.

After the first movie is over, its time for 'splosions. Chuck, Lee and gang invade the whole country on motorcycles and dune buggys and seem to have unlimited ammo as well as endless rocket launchers. There's motocycle jumps and building explosive rounds fired. The Delta Force may have been able to defeat the Axis Powers all on their own. It's ridiculous.

So in review, this is a mega must-view movie. It's got all the things a fan of bad movies goes for and we recommend it. Just be warned about the first 100 minutes being bullet free.

Masters of the Universe Preview