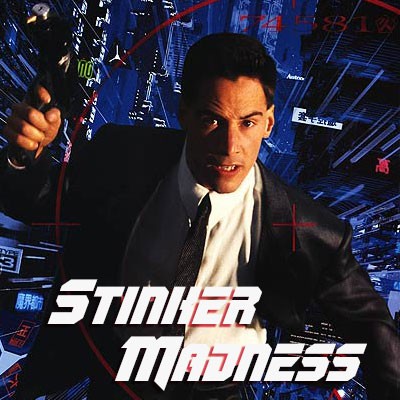 It's a cyberpunk trip through the Internet with Keanu Reeves as he portrays Johnny Mnemonic, a hard-drive installed brain courier guy who has to deliver the cure for Chronic Internetitis Addiction to a group of resistance fighters trying to free our minds from evil corporate influence.....or something?

Wow, 1995 really had no clue how the Internet worked. Yes, this is one of those "lets go into the Internet....with our minds" movies. They didn't get it right. I, however, don't want to spend too much time on how wrong they got with the Internet. I will say that it is the worst onscreen representation of the Internet in film.

Keanu is quite bad, if not at his worst, which many may think that isn't a stretch for him but its hard to say that his work in John Wick was not impressive (even if he only had 10 lines). But Johnny Mnemonic stands right beside Johnny Utah in an actor forgetting that they are in a film. Dina Meyer does her best impression of Dina Meyer. She sets out to portray an actress who stinks. Dolph Lundgren, Henry Rollins, Udo Kier, and Ice T all do just fine and make room for the two main characters to stink it up without helping.

The primary problem with this film is that it makes no a lick of sense. Johnny's motivations are contradictory to his actions. The "bad guys" do things to stop Johnny from making his delivers when it seems that they are the only people that would want to hire him in the first place. Everyone seems to be just doing things to do things. Really if everyone just lets Johnny deliver his digital goods, then its in everyone's best interests. Lastly, the whole idea is that Johnny has to deliver 320GB in person with the data stored in his brain and then download the data onto a VCR tape. Nope! Today, we do that by uploading the data to the cloud and no brain courier is ever needed. It's a terribly inaccurate vision of the future.

The good news is that its a total blast of badness that is a true gem to watch. It's impossibly stupid, horribly ridiculous, and laugh a minute fun. The action sequences are super dumb and combined with the "going into the Internet" scenes make for a ton of laughs and good riffing with friends. There's never a dull moment in this film and makes for a great viewing experience. Get out your VCRs, put this in, travel into the future and then be ready to try to figure out what the hell just happened with some friends.

How do you feel about this post?
Happy (0)
Love (0)
Surprised (0)
Sad (0)
Angry (0)
Tags:
Going Into The Internet 90s action cyberpunk Keanu Reeves
Prelude to Road House
Prelude to Johnny Mnemonic