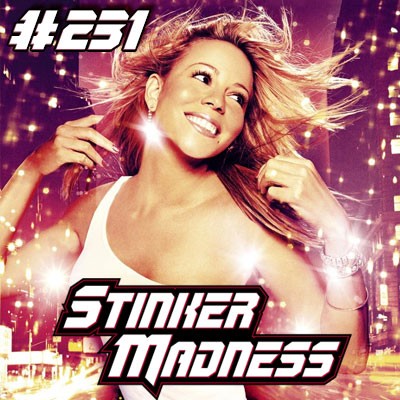 In 2001, Mariah Carey decided to wreck thousands of lives and destroy Sam's affection for her visual appearance, primarily her face. While "glitter can't overpower the artist" Glitter can't even overpower it's own idiocy, racism, and sexism.

What? Glitter is a period-piece? This takes place in 1983? WTF? Why on Earth does it take place in 1983? The clothes, the cars, the music, the set pieces, the vernacular, NOTHING was done that says "Hey, it's 1983" except a bottom 1/3 graphic. It's screams that it's actually 2001. And 1983 serves absolutely no purpose to the story. None. If there was a bad movie award for poor and unnecessary choices and the subsequent execution of said choice, this would have been that categories Gone With the Wind.

So Mariah....is a pariah....to acting. Now that that terrible joke is over, she stinks. She truly looks lost and confused throughout the entire production. She appears to be on Quaaludes and just tripping balls at the production lights on the set. She's out of it completely. Unfortunately, her terrible performance is not a fun thing to view. It's not laughable or enjoyable. It's almost none-existent as this film hardly features any lines for her to screw up. So no fun there which this reviewer looked forward to the most. Bummer.

Then there's the visual aspect to Carey. We're not going to talk about any physical characteristics that she was born with, so I feel we're clear here. We're talking about whomever was in charge of hair, makeup, attire, and shooting around her stupid eyebrows. It's awful. Mariah Carey very well could be an absolutely beautiful woman but we can tell you that she's positively down-right fugly in Glitter.

The songs stink, the performances are nowhere to be found, the acting sucks, Terrance Howard has a "punch me" face, everyone is douche, the story is absent, and fails to come around and make the statement that it EXPLICITLY states at one point. Despite all of that, the fact that this film is #31 on the IMDB Bottom 100, but it is NOT that terrible. Possibly bottom 100 but #31 is way too high. It's just not very good. But it isn't very easy to hate unless you have some problem with the lead outside of the film. Hate is required for a film to be this high and there's just not enough going on to hate it. It's just not good. But with that, it's still not worth watching.

How do you feel about this post?
Happy (0)
Love (0)
Surprised (0)
Sad (0)
Angry (0)
Tags:
music leading lady 00s
Prelude to Ninja III: The Domination
Prelude to Glitter