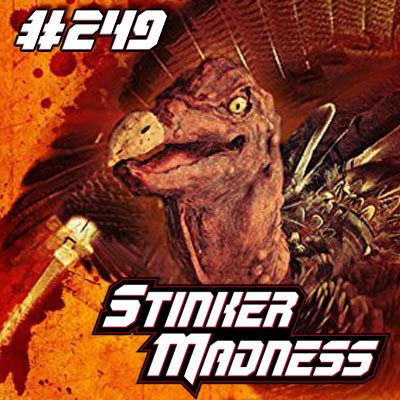 While we're too late for Thanksgiving, it's never too late for a movie about an ancient Native American curse that manifests itself in the form of a very dirty mouthed killer turkey. When you have 0 money and you accomplish what was done here gives us a tip of our hats but a wag of the finger too.

ThanksKilling deserves to be congratulated. It's a better film in all standpoints than the majority of films that cost 0 dollars to make and better than even a majority of films by The Asylum or any crummy gimmick movie showing daily on SyFy. The effects aren't bad, many jokes delivers (some do NOT), the pacing is never dull, and the bad acting is pretty fun. It deserves some merits.

Whether we're late on our Thanksgiving episode or not, we're still going to enjoy a delightful little film about a killer turkey enacting revenge upon all white people for the horrors put upon the Native Americans. Sounds plausible...

The Wild Card - Who would win in a knife fight?

ThanksKilling was shot on a budget of $3500 in the summer of 2007 and it received it’s official release on DVD in 2009. It seems to be the brain child of Jordan Downey, who has little credits outside of the ThanksKilling series. The main assists would be from working editor and writer Brad Shultz and working cinematographer Kevin Stewart. Though Downey’s only major titles include ThanksKilling and it’s $100k Kickstarter sequel, ThanksKilling 3. Shultz however has over 30 editing credits as well as over 20 writing credits, there are some sprinkled in directorial credits as well. He seems to be a man of my own heart. Some of his more personal short projects involve the NFL. These are the sort of special projects that both alienate fans of football and fans of comedy. After the 99% think you’re an idiot, myself and the other one percent, or fans of extraordinarily obscure comedy not the social elite, will regale. His projects in this arena include Vince Young for Towels and Rob Gronkowski Erotic Fan Fiction with Charlotte McKinney and Rob Gronkowski. Kevin Stewart, who was the other producer, cinematographer and additional writer, has over 50 shooting credits.