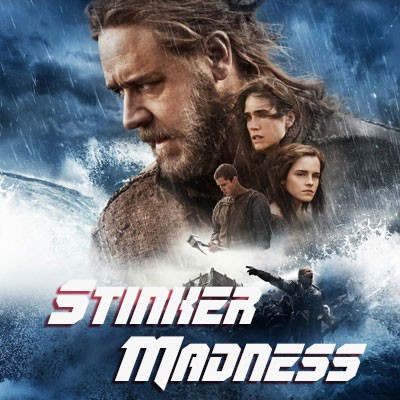 We apologize for the poor audio on this episode. We had a new computer setup and frankly we don't know what the hell we're doing. But you all seem to like what we do so keep on'a listenin'.

The first half is "The Bible as told by Tolkien". The second half is Cape Fear (no really). And the entire thing is sprinkled with crap. It's Noah and it's arguably the worst movie ever to see a theater release.

We honestly can't see what anyone sees as good in this film. I guess it's full of action, but there is very little good storytelling here. Its purely built around the action and effects, which really doesn't help because the action is incredibly dumb and the effects look absolutely terrible. Tons and tons of CGI that looks pretty rubbery. Then there's battle-action Noah. Where did Noah learned to fight like Legolas?

Darren Aronofsky has wanted to make this movie since he was 13 years old. So this film is truly written by a child and it shows. It's as if a young Darren saw all the 70's disaster movies and then teamed up with Robert Hamburger to write this film. It's really poorly thought out, has 10,000 plot holes (and not just the story of Noah, but the film within the world of Noah).

Russel Crowe plays his usual mumbling, troubled guy that delivers each line to someone who doesn't exist on-screen. Imagine his Gladiator business with his acting inspired by a drunk Dennis Hopper. Jennifer Connelly fumbles with each line and is offensively bad as Noah's wife. Percy Jackson is laughably bad. Anthony Hopkins is the definition of "hammy" at level 65.

This film is 2 hours 15 minutes of absolute tedium in stupidity and ideas thrown at you without any emotion or care behind them. Stay completely away from Noah if you enjoy story at all.

How do you feel about this post?
Happy (0)
Love (0)
Surprised (0)
Sad (0)
Angry (0)
Tags:
worst movie ever supernatural Lame nonsense adaptation
Prelude to Beastmaster
Half Past Dead