Matt Salinger dons the role of weak but honorable Steve Rogers and becomes Captain America as part of the Super Soldier Program so that he can be strong enough to stop the Nazi equivalent, the Red Skull. Sound familiar? Well that's about all this film has in common with anything that you know about Cap. The rest is pretty much the dumbest hot mess that you could possibly imagine.

Albert Pyun's Captain America is maybe the worst adaptation of a single character that has ever been made. Matt Salinger is awkward moving at all times and shows absolutely no athletic ability. Captain America is a bit of a dick as he really shows little concern for other people. He's about as smart as a box of hair. He really never succeeds in any mission nor is he ever known by the world as a WWII superhero, even though when he is unthawed the world seems to care, despite having never heard of him before.

The visuals (costumes, effects and action) are horrendous and make up the best part of the film. By best I mean that they are hilarious. Cap's outfit looks like its made of vinyl and seems to get ripped up randomly from what we can only infer is that Matt Salinger leaned up against walls too much. The shield looks like an after dinner peppermint. Red Skull only has Red Skull face for the first 5 minutes on screen. The Red Skull rat is epic bad stop-motion. The list of bad visuals goes on and on.

Really the whole problem with the film is that Captain America is a true idiot and buffoon. His first mission as Cap is a failure as he gets his ass kicked by the Red Skull and then strapped to a rocket. After reanimation, he walks back to the states from Alaska instead of just asking someone "Where am I and how do I get back?" He does nothing to prevent his old flame and her family from getting murdered. And his main plan for taking on the Red Skull is to find the Red Skull's real name....huh? You just need to go back to the castle that your last memory is from, you moron!

You can really tell that this film had about 10 million rewrites from the original script and the film just got away from the makers. It is a truly hot mess. Usually that works for us in bad movies but really this just stinks. There's far too little happening on screen at anytime and the story is just too convoluted to really be able to enjoy what is happening. You're too busy scratching your head trying to figure out what is going on to really be able to even make fun of it. Our main takeaway from the movie is that Matt Salinger in the Cap uniform looks waaaay too much like Peyton Manning to ignore. 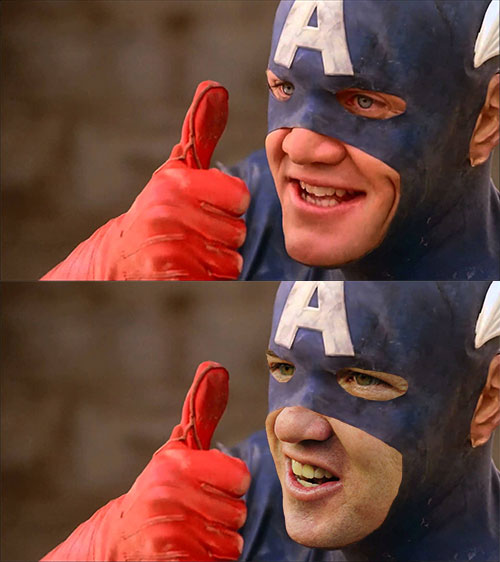