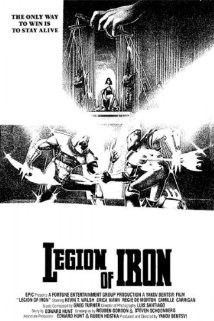 So imagine you're sitting at make-out hill, getting a little R-n-R and then suddenly some guys (sorta dressed as cops) swoop down and steal you away to an underground facility where you must gladiatorial fight to the death for your right to protect your girlfriends virginity.

Well that's the entire plot for this little known 1990 stinker brought to us from Epic Productions. IMDB only has a total of 64 users having ever viewed it which makes it too rare to be on the Bottom 100, not that it should be.

Unlike Barbarian Queen, that was gratuitously chock full o' shirtless girls, this movies surprising achievement is a stark lack of nudity. I think their may be a brief man-ass, but its amazingly bare (phrasing) considering its very adult (and sometimes uncomfortable) content material. There is some pretty rough rape scenes and some very Stockholm Syndrome undertones with Alison (Camille Carrigan) that were very bold for the b-movie genre, which usually has very light-hearted subject matter.... as far as character development anyways.  In fact, if it wasn't for the silly plot idea, the screenplay might have been respected at the time.

I will warn the viewer this, stick with this movie.  3/4 of this film is pretty mediocre and has a few scenes where I had a hard time paying attention. The plight of poor old kidnapped Billy (Kevin T. Walsh (I assume the T stands for Top Notch)), was pretty uninteresting especially after his sole, overt motivation to win in battle (protect his girly's chaste underwears) is a moot point. A good chunk of this film is Billy being psychologically toyed with by the evil Queen Diana (Erika Nunn) to join with her as her gentleman-servant. Erika Nunn is easily the worst part of this film, as her character sucks and she is impossibly ugly. I usually try to avoid trashing people's looks but because she is meant to be a femme-fatale, who wears revealing "future" attire and strange headwear, that I believe is meant to make the viewer think, "Hey Billy doesn't have it so bad", I think she's fair game. When she was on camera, I spent most of it averting me eyes.  Yikes.

So Billy (who really is a wanker) befriends Lyle Wagner (Reggie De Morton) who is the facilities main trainer. Why, I'm not sure because Lyle's fighting style appears to be circle your opponent and give him a mean face and then wait for him to hit your sword; just like Barbarian Queen strangely. But either way Billy has a training montage, ala Gymkata and so he is ready to fight.

And fight he does... this films ending is so terrific that if it had just been the entire film had been as rad, it would be arguably worthy of the Stinker Hall of Fame.  Wow. There's Billy dressed up like Ziggy Stardust, Robocop-esque blood packet shooting, TWO Wilhelms (amidst other glorious screaming and foley work), so many guns, other people dressed as characters from KISS The Musical (that should be a thing), a car chase, SPLOSIONS, potentially a stunt mad who is crushed and then best of all, Queen Diana in a Superlite.  Wow...

This film goes from a 2 to a 5 in a matter of seconds and completely out of nowhere.  I highly recommend Legion of Iron at your next Stinkerfest.

Netflix Streaming - Yes as of this posting

How do you feel about this post?
Happy (0)
Love (0)
Surprised (0)
Sad (0)
Angry (0)
Tags:
sleeper gladiators SPLOSIONS recommend
Prelude to Invasion USA
Masters of the Universe